Exarcheia is a very particular neighborhood in Athens. I had heard it was an anarchist hotbed with a counter-culture vibe. Although it didn’t really sound like my style, I have to admit I was intrigued.

We decided to take a stroll through Exarcheia around midday, to explore the neighborhood and also to visit the Polytechnic University of Athens. After fifteen minutes of walking, we ran into humans from all walks of life including professors, punks sporting Mohawks, grandmothers, homeless people, and the average Greek citizen. The area had a rough edge which differentiated it from the more touristic neighborhoods such as Monastiraki and Plaka however at no point did we feel in danger.

Historically Exarcheia is a very curious neighborhood. From 1967-1974 there was an aggressive military dictatorship in Greece. In 1973, several students from the Polytechnic University of Athens in Exarcheia mostly left-wing sympathizers, decided to barricade themselves in the university and create a radio station broadcasting revolutionary anti-dictatorship messages. Soon after, thousands of students and workers joined the protest. The dictatorship reacted by sending a tank sprawling through the gates of the university which resulted in several deaths and hundreds of injuries.

This was a crucial event which seriously questioned the legitimacy of the military dictatorship and at the same time damaged its public image and reputation. It sparked a series of events which eventually led to the dictatorship’s downfall in 1974 and the restoration of parliamentary democracy in Greece.

Today it is home to thousands of students and left-wing sympathizers. Everywhere you look the walls are plastered with radical anarchist graffiti . It is also filled with plenty of independent book stores, coffee shops and a major university. Its distinct revolutionary and intellectual atmosphere make it worth visiting. Throughout my travels, I have never visited a neighbourhood with such a unique history.

An interesting example of oppression during the dictatorship occurred on the island of Makronisos. Greeks who opposed the military regime were sent to this prison island to be ‘re-Hellenized’. Yannis Hamilakis wrote an engaging article on this topic called, “The Other ‘Parthenon’: Antiquity and National Memory at Makronisos.”

Richard Clogg wrote in his book ‘A Concise History of Greece’ about the student protest at the Polytechnic University of Athens on page 164-165. 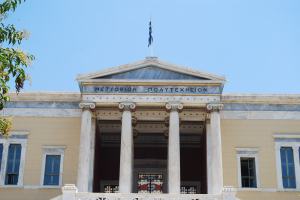